Vanilla Cupcakes, and where to begin?

My day has been so full of so many vanilla cupcakes. I am pretty sure I have said the word vanilla more then 10 times. That would be nearly record for me! So I guess you would like to know why my day was full of vanilla cupcakes. Well, I spent the day FILMING! For you guys, I have created a little challenge type experiment thingy, to find out what recipe is best for vanilla cupcakes.

So if you don’t know, I have a YouTube channel, which I like to post baking tutorials for everyone to see. Lately I had some requests from my friends for my vanilla cupcake recipe. The problem was I wasn’t certain that recipe I had was going to make the best cupcake. So today, I spent the day filming and trialing different vanilla cake batters, and seeing if they work in cupcake form. It was definitely quite an interesting thing to do, and now as a result, my family will be eating vanilla cupcakes for a long time !

I tried 3 recipes, 2 of which were quite similar but still tasted so different.  My original vanilla cupcake recipe, I find some times can be a bit gritty, but today’s actually turned out the best I have done for a while. The other 2 recipes I did, were recipes I had never done before so I really had no idea. Having tried the 3 recipes, I have also picked which one I will continue to use for Vanilla Sprinkles.

So now that, I have filmed the videos, I now have to edit them. Which is not much fun, but I have learnt so much from doing it. I am hoping to post the videos, in next few days if I can edit them fast. You guys, will all have to wait till then, to find out recipes, as otherwise it wouldn’t be surprise. I like surprises! Here is a little sneak peak picture instead! 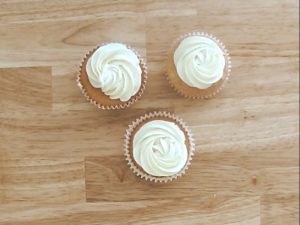 So until I post the videos of The Vanilla Cupcake Challenge, Happy Baking!

Here is a link to video Day 1

1 thought on “Vanilla Cupcakes, and where to begin?”

Searching is in progress